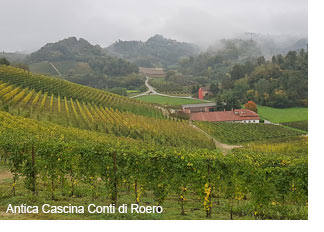 Mixed case offer and four wines on tasting today in the shop until 6:30pm

There can't be many places in Italy where people flock outside summer, but now is clearly the right time of year to visit Piedmont. The fog hangs in the valleys and the first proper rains of the Autumn mean it is not long to wait for the first truffles of the season. For a generation Barolo has dominated general perceptions of Piemonte wines. However, as with many fine wine regions, a generational shift and rising land prices in the heartlands have led to an increase in quality and recognition of the region's other wines. Mavericks like Walter Massa are resurrecting Piedmont's ampelographical history. Near extinct grape varieties like Timorasso are coming to the fore. A young generation is approaching traditional workhorse varieties like Arneis with enthusiasm and care.

Nebbiolo still dominates here, but now you should be casting your eye a little further than the traditional 11 villages that make up Barolo. These days Barbaresco is more than capable of matching Barolo for sheer quality. Roero's sandier soils offer a (frequently welcome) softer style of wine to Barolo. And (to this writer at least) some of the most exciting and diverse expressions of Nebbiolo are comming out of a re-emerging Alto Piemonte. Its once great communes have been reduced to a mere handful of producers but they are seeing attention return to them. Roberto Conterno bought Nervi in Gattinara and new vineyards are being planted in Bramaterra for the first time in years. It is fair to say global warming hasn't hurt the ripeness of the grapes in these Northerly vineyards. And, after all this talk of the new there is also a small reminder in the midst of the clamour for the great Cru wines that the best value and most complete wines can often come from the traditional Barolo blend. /EE

Click here to see what is on today's tasting.

2018 Antica Cascina Conti di Roero Favorita: Favorita is (regardless of what the locals claim) Vermentino or Rolle by another name. Here the sandy soils of Vezza in Roero and a perfect, steep amphitheatre produce a brilliantly bright, grippy, mineral white.
2017 Alberto Oggero Santo Stefano Arneis: Alberto ferments one half of his crop in steel for freshness. The other half is picked a little riper and left on the skins for more texture and complexity. A perfect riposte to those who think Arneis can't achieve a real depth of flavour.
2016 Walter Massa Timorasso Derthona: Timorasso is in danger of becoming trendy with Roagna and Vietti buying up land. However it was Walter who resurrected Timorasso and he remains the benchmark. Great texture, exuberant fruit and age-ability. Find out what the fuss is about.
2016 Giuseppe Mascarello Langhe Freisa Toetto: Freisa is a very close cousin of Nebbiolo. The characterful, slightly uncouth cousin from the small village. However, take them to an address as smart as Guiseppe Mascarello and it turns out they brush up pretty well.
2015 Giuseppe Rinaldi Dolcetto: sadly Beppe Rinaldi died last year. Undoubtably one of Piedmont's greatest winemakers, his Barolo has become all but unobtainable. However he lavished the same care on his Dolcetto. What can often be a simple, sweetly fruited red in his hands gained a refinement, elegance and savour.
2013 Roagna Barbera d`Alba: Luca Roagna's star is rising fast. A grower on this list described Luca as 'ascending to the throne of Piedmont'. In Luca's words `This isn`t Barbera, this is Pira.` From vines planted in their Pira vineyard in 1937 and 1990, then held back for Roagna's typically herculean 5 years. Fresh, balanced and structured. Grown up Barbera.

2018 Trediberri Langhe Nebbiolo: fruit from the Langhe's most southerly vineyard, a 600m high patch in Vicoforte produces a wine as easy going and exuberant as the wine maker. The antithesis of Nebbiolo's reputation for being hard work.
2017 Marco Porello Langhe Nebbiolo: surely this is some of the best value Nebbiolo out there. Another producer from Vezza, Marco makes a fragrant, pure and delicate style of wine. A surprisingly graceful, everyday Nebbiolo.
2016 Alberto Oggero Roero Nebbiolo: initially cool and limpid, this blooms with bright, succulent fruit. Classic soft Roero tannins, this is long and expressive. This was only his 6th vintage, so we can't wait to see what happens when he gets a little more experience under his belt.
2015 Antoniotti Bramaterra: Bramaterra is the tiny jewel in Alto Piemonte, though before World War 2 it produced more wine than Barolo and is possibly the birthplace of Nebbiolo (Pliny cited the grape 'spanis' here in 196BC, and today the local name for Nebbiolo is Spanna). Here Nebbiolo is blended with Vespolina, Croatina and Uva Rara adding flesh, spice, pepper and a brambly quality to the fruit.
2015 Cabutto Barolo Tenuta La Volta: this is juicy, vibrant, and exceptionally well judged. The ripe tannins and solar character make it hard to resist now; the concentration and great balance mark it out as a wine that will age effortlessly. Being an estate firmly under the radar this is spectacular value.
2013 Elvio Cogno Barbaresco Bordini: We could have included Valter's Nascetta - another man single handedly rescuing an obscure white variety from extinction - but his Barbaresco is hard to resist. A great expression of a commune that has often been in the shadow of its illustrious neighbour.