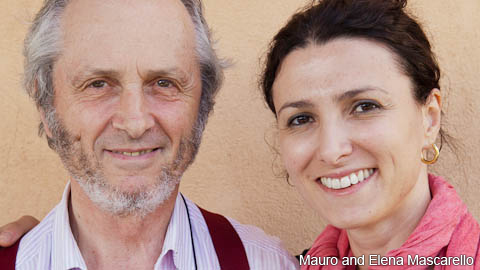 The one word to sum up Mascarello would be tradition. Established in 1881, it appears very little has moved on, both with the wines and the family. All the work is done in the vineyards with meticulous attention to detail and in the winery their philosophy has changed little over the last century. There is no chance of them following trends for new French oak or rotary fermenters; they continue to produce wine the only way they know how. In the winery (an old ice house) all the automated stainless steel tanks say ‘emergencia’ on them and even this is ignored! Mascarello is a patriarchal regime with father Mauro, now at least in his late 60s, unwilling to hand over any responsibility to his very capable and intense son Giuseppe. Christian names are not left to choice here and the Giuseppe-Mauro name is passed from father to son although daughter Elena has escaped this tradition! The wines, like the family, are profound, age worthy and long-lived and there is an enormous amount of charm in their stubbornness. (CW 09/11/07)

Mauro Mascarello is one of the most fascinating personalities in Piedmont. Today’s younger generation of high-end producers speak with great reverence about Mascarello and even more so about his father Gepin who was a legend in these parts. Mascarello was an internationally-renowned producer decades before today’s big names were even making wines under their own labels. Twenty years ago, Mascarello’s signature Barolo Monprivato was one of the most expensive Barolos on the market. Then the new-age style became dominant during the 1990s and the estate languished in perception, but not quality. In recent times Mascarello has enjoyed a resurgence in popularity which is long overdue. Prices have gone up, but the Barolo Monprivato in particular remains a steal relative to other world-class wines. Monprivato is one of the handful of Italian wines than can hold its own with the best being made anywhere in the world. - Antonio Galloni