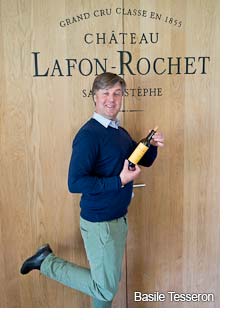 Following the Victory Day break, there's been a rush of releases over the last 48 hours. Pessac-Leognan was first off the blocks yesterday with accessible Larrivet-Haut-Brion and the rather more serious Pape-Clement. Then we jumped over to Castillon and St-Emilion for debonaire Stephan von Neipperg's excellent value d'Aiguilhe and the well-regarded Clos de l'Oratoire. Also from St-Emilion, Uncorked's first allocation of Beau-Sejour Becot sold out almost as quickly as we could get it on the website. From the owners of Mouton, we then saw the lovely Armailhac; with some of the oldest vines in the Medoc and vineyards close by Mouton, this is a serious proposition. We rounded the day off with Bruno Borie's Croix de Beaucaillou (which has grown in stature with its sibling Ducru) and his excellent Lalande-Borie (made from vines near Talbot and Lagrange).

Today's releases have been all about the left bank. 'I don't want to claim this is the best Lafon-Rochet we have ever made, but it is exactly the kind of wine I have always wanted to make.' Basile Tesseron said it modestly, but he was absolutely beaming with pride when we tasted at Lafon-Rochet, and there is no question that his 2018, which kicked things off this morning, is a brilliant wine. From St Julien, we have Gloria and Saint-Pierre. There has been a lot of excitement about both of these; sibling properties they may be, but they have made wines of markedly different character. Also today, Olivier, the grand Clerc Milon and the even grander Palmer, which sold out instantly. Today's significant right-bank release is from St Emilion, the complex and fascinating Larcis Ducasse.

Vinexpo is next week so we're expecting things to go quiet again, for now. /NT