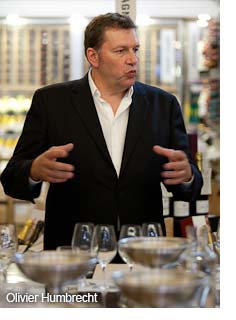 The master of modern Alsace

And don't let the merchant near the secateurs

The foothills of the Vosges Mountains tumble down towards the Plain d'Alsace, with fine views out towards the Rhine, Germany and the Black Forest. Here, Olivier Humbrecht's best vineyards cling to the steep slopes. There have been Humbrechts making wine in the area since the 17th century, but since Olivier took over in the late 1980s he has brought Domaine Zind Humbrecht to a new level of refinement; he is undoubtedly one of Alsace's greatest modern producers.

Visiting the domaine in February, I saw the intense levels of care and thought that go into every aspect of viticulture and vinification. February was pruning season, and we were walked through a pruning masterclass - the level of consideration demanded of the pruners is forbidding. Wisely, they did not allow me near the secateurs. Every vineyard has a different aspect, is on a different soil type, and makes a quite different wine. The sense of terroir is immense. The red, iron-rich soils of the Rotenberg are ideal for an intense, spicy Pinot Gris; only Riesling thrives on granitic Brand. The warm Clos Hauserer makes an especially vibrant, high-energy Riesling. Goldert is one of the very few grand cru Muscat vineyards, and I struggle to believe that Olivier's Muscat Goldert isn't the world's greatest dry Muscat, a profound wine that ages shockingly well. The Clos Jebsal has an unusual combination of cool soils and very warm microclimate that favours the development of botrytis; Olivier has only ever been able to make sweet wines from the site.

A debate rages about which is the domaine's greatest single vineyard. Many say Clos Windsuhl. This Hunawihr site overlooks the fortified church of Sainte Hune and the Rosacker grand cru. As a monopole, the Clos Windsbuhl is unlikely ever to be conceded grand cru status, yet in fact it deserves such a status more than most Alsatian grand crus; Windsbuhl makes an intensely pure, classical style of Alsatian white. But Olivier himself would probably tell you that his greatest vineyard is Rangen, in the very south of Alsace. The volcanic soils here are unique in the Alsace and imprint a very specific aromatic character to these most individual of wines. /NT