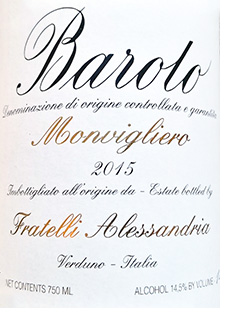 Thanks to the Alessandria family, the once under-the-radar village of Verduno has been firmly put on the map. While the family has been making fine Barolos here for five generations, quality has never been higher than now; under the stewardship of current incumbent Vittore Alessandria, the estate's profile has soared. Vittore can seem like a pretty serious fellow, till he breaks into a huge smile and stops trying to hide the fact he loves what he's doing. And he's got reason to be pleased. The hard work of recent years, the extra attention to detail in the vineyards and the further investments in the cellar have all reaped their reward in the wines.

Generous and succulent, the 2015 Alessandria Barolos encapsulate their vintage. Snow then rain early in the season gave the vines enough water to avoid hydric stress later in the year. A warm spell got things off to an early start. Summer was hot, but enough cool spells intervened to keep freshness in the wines. Vittore explains that tannin levels are close to those of 2010, the most structured vintage ever made here, although the wines don't come across that way.

Their 2015 Barolo is very refined, not overworked, extracted or too ripe; just right. The San Lorenzo (from the cru of that name in Verduno) is complex, polished and floral, a welcome return for a bottling missing last vintage. Monvigliero is the 'grand cru' of Verduno, her greatest vineyard; fine clay soils and the proximity of the Tanaro River give a character all their own. And from outside Verduno, in Monforte, they also have a fine holding in Gramolere cru, lifted, bright, herbal and minty. /NT