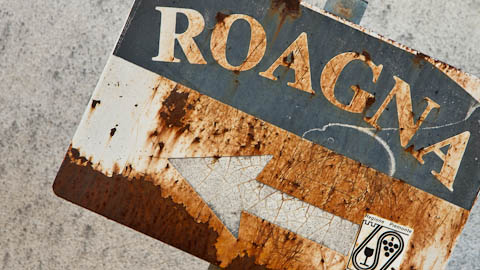 Although they have their family roots in Barbaresco, the Roagnas also operate in Barolo to great effect, managing both terroirs rather brilliantly. The first Barbaresco vineyard - Pajè - was purchased in the fifties and the company has grown steadily since then. The farming is uncertified but strictly organic, with low inputs and the use of techniques like cover crops between the rows of vines. The use of sulphur dioxide is very low and fermentation and the very long macerations take place in large, old casks. In this respect together with infusion rather than extraction winemaking Roagna is ultra traditional.

If you want a fruit cocktail then these aren’t the wines for you but if glorious perfume, mineral freshness and seductive texture are your thing then Luca is your winegrower. In fact he’s a winegrower’s winegrower. If you want a measure of his mettle and abilities then look at how he manages the challenging vintages. His 2014s turn upside down the accepted characterisation of this mixed year; they are just magnificent. He got the picking date completely spot on.

Centuries of study by Benedictine monks first identified the crus of Barbaresco and Barolo, knowledge that was forgotten in the turmoil of the 18th and 19th centuries and restored only recently. The Roagna family goes back almost that far and for three generations have concentrated their efforts on reclaiming the glory of their best vineyards. Those monks - as in Burgundy - were super-keen students of the natural world and how different soils and aspects would affect finished wines. Luca Roagna, currently the young chef de cave at the family domaine, continues that work. None of their vineyards has ever had herbicides used on them (including the one they rent from an old contadino) and Luca runs them along strict organic lines, though doesn`t believe in certification. The life in the vineyard soils makes these wines sing and he`s deadly serious that all this makes a big difference to the wines. (CW 15/07/19)