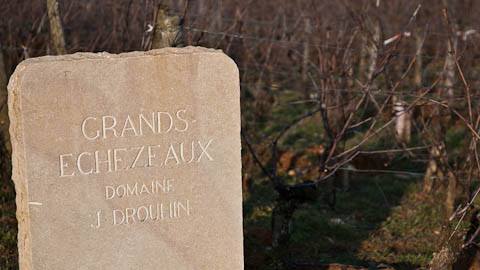 Joseph Drouhin is a old company that thinks modern, a large producer for Burgundy that likes to think small and a company that could rest on its larels but likes to work hard and meticulously. Founded in 1880 by a man from Chablis who wanted to get into the wine business(!) Joseph Drouhin has remained a family business that has grown sustainably through four generations. In a way, their Oregon business overshadows their Burgundy one, with each having the same amount of land under ownership, though of course Drouhin Burgundy also has a negociant arm that supplys the lower end of the range. Their own land holdings across the Cotes comprise 90% Grand and 1er cru.

The domaine is run according to strict biodynamic certification, which they take immensely seriously. When they were considering beginning with BD, they formed a study group with some other Cote de Beaune growers to investigate their soils and subsequently set up an entreprise to produce the composts and preparations. They also use this group to study their terroirs to get the most out of them. They are utterly dedicated to improving the quality of their soils and the health of their vines as well as protecting the biodiversity that in turn helps protect them from pests.

We`re sometimes accused of championing the tiny and obscure in Burgundy, but neither you nor we should overlook this level of quality, wherever it comes from. (CW 18/11/14)