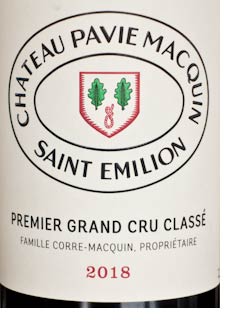 Today the French are enjoying a well deserved day off to celebrate their (shurely 'our'? Ed) winning the war so time to catch up on the past couple of days' burst of activity.

Monday morning kicked off with Beychevelle but sadly we get very little of this and it went straight to previous purchasers. Then came Prieure-Lichine, the large Margaux property owned by Bordeaux négociant firm Ballande. Another large estate, Cantemerle, has produced a classic 2018 and the price is typically modest - it's usually the cheapest Medoc classed growth. From Pauillac we have the Casteja family's Lynch-Moussas. Over on the right bank, we have Jean-Luc Thunevin's Valandraud, pioneer of garage wine.

Like every merchant in the country, yesterday morning's Carmes Haut-Brion and Calon-Segur were heavily oversubscribed - though we do have a small amount of the latter's second wine, Marquis de Calon, as well as Capbern, its sister chateau. But one of our absolute favourites of 2018 is still available, albeit in small volumes. The 15 hectare St-Emilion vineyard of Pavie Macquin is superbly sited between Troplong Mondot, Pavie and Pavie Decesse. The 2018 should rival the 2016 (now in stock at £360/6 in bond or £89.95 a single bottle) as the best wine ever made here. It's one of the smartest buys in St-Emilion.

Other notable releases yesterday were the much improved St-Estephe, Meyney, the rebranded and "repositioned" Pauillac, Haut-Batailley (now owned by the Cazes family of Lynch-Bages), the rich and exotic - and high-scoring - Margaux, Malescot St-Exupery, and three from St-Emilion - Bernard Magrez's Fombrauge, the Cuvelier family's Cote de Baleau (who also released Poujeaux), and the popular and modern-styled Barde-Haut. /AR

View all wines released so far