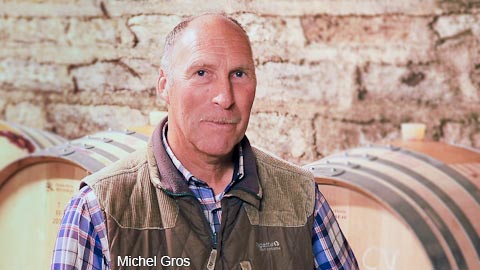 Michel Gros went straight from Beaune Viticultural High School in 1975 to work with his father Jean in the family wine business. He is the 6th generation of the Gros family to make wine since his Great, Great, Great Grandfather settled in Vosne-Romanee in 1830. At one stage the family owned 2 ha of Richebourg and 3 ha of Echezeaux, since diluted amongst descendents. After receiving his own parcel of 2 ha from his father in 1979, Michel continued to acquire various parcels in Burgundy while simultaneously looking after the family business. Upon his father`s retirement in 1995, the estate was split up and divided between the 3 children. Michel is old school, he doesn`t leave the Domaine much, he`s not one to fly to Shanghai for the big shows and hasn`t really jumped on the Burgundy bandwagon. He sees his job to make delicious wine and to try and persuade the next generation to take on the stewardship of these super vineyards. He has a wry sense of humour. His dad bought him his small plot of vines in Clos Vougeot when he was 12. At that time he`d have preferred a bike, but now he`s reconciled to the gift... (CW 18/01/18)