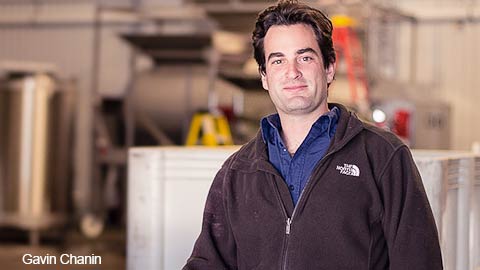 Between LA and San Francisco, Santa Barbara County may not yet be as well known in wine terms as Napa or Sonoma, but it is an area very fast on the rise. It is already home to some extremely distinguished vineyards and wineries. It’s a diverse place, too; the eastern inland reaches are hotter and are most known for Cabernet Sauvignon and Syrah, while the west excels at cool climate, ocean-influenced Chardonnay and Pinot Noir. Only a few miles from the coast, Chanin belongs firmly in the western part of the county, and focuses on Pinot Noir and Chardonnay; as winemaker Gavin Chanin argues, these two varieties are especially revealing of subtle differences in geography, geology and climate.

Gavin’s approach is all about terroir; everything Chanin releases is a single vineyard bottling. Not only that, with old vines in some amazing sites, these are among the best vineyards the county has to offer. Two of the very best are Bien Nacido and Sanford & Benedict, both planted in the 1970s. Old vines, low yields, careful farming and gentle winemaking all make for a style that is balanced rather than overbearing. It’s no surprise that it was through the IPOB (In Pursuit of Balance) movement that Chanin came to wider attention.

Gavin is a busy man. He learnt his trade at classic Santa Barbara wineries Qupe and Au Bon Climat, rising to the position of assistant winemaker at each, while at the same time studying art; the Chanin labels are his own paintings. He is also the winemaker at Bill Price’s Lutum label. Bill owns and farms a few great sites in Santa Barbara and beyond (including the Gap’s Crown Vineyard in the Petaluma Gap in the cool south of Sonoma), and the Chanin style shines through in the Lutum wines. (NT 10/07/18)