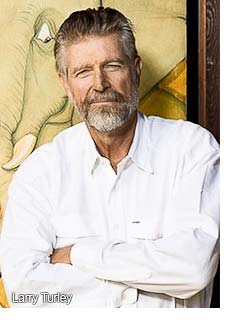 Larry Turley is a man with a mission. He started off in the 1970s as the co-founder of Frog's Leap Winery, making Cabernets and Chardonnays. But over time he came to understand his interests lay elsewhere. By the early 1990s, when Cabernet was king in California, Larry had realised that one of the state's great viticultural treasures was in danger of being lost; old vine Zinfandel plantings, often predating prohibiton, sometimes on original, ungrafted rootstock.

And so Turley Cellars came into being. Larry set about acquiring as many of these treasures as he could, sending in his own vineyard crews to manage farming, converting to organics (if necessary). In the early days, he went for a very big, bold style in his wines. Latterly, he's dialled it back a notch; the wines are on average 1% lower in alcohol than a decade ago, and the use of new oak is more discreet. The reward is greater finesse, more sense of varied terroir, more expressive perfume.

Larry believes in single-vineyard wines, and the range here is pretty big (29 different bottlings across the 2016 vintage). But it's worth it - they can be remarkably different, and they represent an astonishing slice of California's viticultural heritage. While the Estate is their home vineyard in Napa with (relatively) young vines, Kirschenmann is a Lodi vineyard still on the ungrafted roots it was planted on in 1915; Steacy Ranch is also Lodi, dating back to 1907 and again on original rootstock. Pesenti is in Paso Robles, planted in the 1920s (it's for fruit juice, honest, officer) while Cedarman is a mixed-age Napa vineyard. And their Old Vines is composed of fruit from sites across California which are just too small to make it into a bottling of their own, from vines anywhere from 41 to 129 years old. So that you can get a feel for the range, we've put together a mixed case with money off and free delivery. /NT