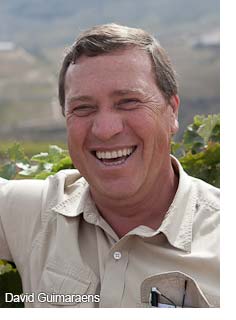 With its high altitude, Atlantic position, the Port trade has historically been terribly conservative in guarding its reputation for only releasing the best wines under the vintage designation. They can be a bit rueful when looking at releases of less than perfect vintages from many of the other self-styled quality wine regions around the world. Consecutive vintages are very rare because the Port producers are naturally wary of overstating the worth of any year.

So what is special about 2017? All Port producers are historians and the striking resemblance of the whole season to the legendary 1945 became apparent quite early on. The drought conditions, sunny skies and the precocious nature of the growing cycle alerted them to the potential of this year. Tasting the ripe grapes prior to harvest confirmed their suspicions and the resulting wines have made them very pleased indeed. Fladgate Partnership head winemaker David Guimaraens said it was reminiscent of the 1945, with elegance and mineral restraint balancing the structure and dense, powerful fruit. Dirk Niepoort called it 'epic' when we met him and said it was the 'best wine I have ever done'. Drought years need old vines to express the best of the year and vintage Ports exploit these old-timers with their deep roots and solid affinity with the harsh, granitic terroir.

From our tastings we can confirm that the 2017s are quite special. The depth in the wines stems partly from the drought conditions and those old vines producing very low yields of intense, thick-skinned fruit. They are absolutely delicious right now (we have some bottles open here in the shop if you don't believe us and feel like popping in for a sample or, better still, join us for our sit-down tasting on Thursday 6 June). You would be forgiven for tucking into many of them over the next three or so years, after which they are likely to slam shut. Subsequently they are going to be some of the longest lived wines the region has produced; more so than the famous 1977s and certainly more than the most recent vintages. With quality like this, you don't need the excuse of a 2017 baby to tuck into these stunning wines. /CW