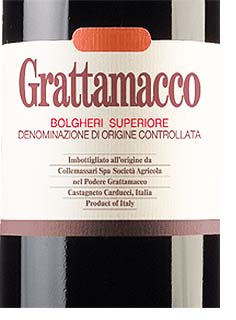 'The 2015 Bolgheri Superiore Grattamacco is big, bold and absolutely stunning. This blend of 65% Cabernet Sauvignon, 20% Merlot and 15% Sangiovese is dark and luscious, with overlapping melodies of tobacco, spice, dark fruit and grilled herb. There is so much depth and power. This vintage is a gem for your cellar, and the wine should award a long aging trajectory for those who have the patience to wait.' - 97 points, Monica Larner, robertparker.com, May 2019

The affinity between Tuscan soils and the classically Bordelais grape varieties is now well-established, and in gravelly coastal Bolgheri, where Sangiovese never grew very well anyway, Bordeaux varieties are king; this is a terroir for Cabernet and Merlot, the Super-Tuscans. Nowadays there are 50 wineries in Bolgheri, but you don't have to go that far back to reach a time when there were only two. Cabernet Sauvignon came out of the shadows with the first commercially released vintage of Sassicaia in 1969; Grattamacco joined it in 1977 as the second-ever Super-Tuscan.

With 300 days of sun a year and a constant breeze keeping away disease pressure, there are harder places to grow grapes. The Grattamacco vineyards straddle steep slopes that look down towards near neighbours Sassicaia and Ornellaia, then the coast. Soils are very diverse across the vineyards, which translates into complexity in the final wine. Bolgheri as a rule doesn't like Sangiovese but there are pockets at Grattamacco where it absolutely thrives, hence the 15% Sangiovese in the blend - it brings vivacity, according to winemaker Luca Marrone.

Nor is it just about good terroir; they also know how to look after it. Viticulture is entirely organic. When you visit, you'll see rows of broad beans growing between the vines; they'll be cut down to feed nitrogen back into the soil. With Luca at the helm, Grattamacco has recently been putting in some stellar performances. And in 2015, nature really played along, supplying a warm, high-quality vintage where the low yields were amply compensated by the concentration and quality of the fruit. /NT