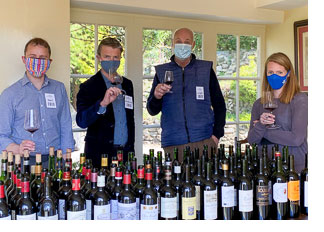 Testing the terroir, and some outstanding high-fliers

A mild, wet spring, a long, hot summer, and a hot, dry harvest. On the face of it, the 2020 Bordeaux vintage looks a lot like several other recent vintages with similar conditions: 2016, 2018 and 2019. Not a bad cohort! Like 2018, 2020 is a heterogeneous vintage with some remarkable peaks. Like 2019, the wines show a balanced, linear style in which the heat of the growing season is barely evident, and the wines enjoy an attractive sense of freshness. And at their best, they have the structure, complexity and seriousness of the 2016s. The biggest difference is that yields are much lower in 2020, among the lowest of the last decade, so some wines may be more fought over. 2020 was very much a terroir vintage; the wines that excelled are most likely to be those with terroir good enough to deal with both excess water in the spring, and drought later on. And then of course, 2020 drew a wild card that impacted on the human response: Covid-19.

Spring 2020 was mild and wet, and the vines got off to an early start. Budbreak came around mid-March, mostly swerving frost problems. The crucial flowering period took place mainly in the second half of May, happily avoiding the rainy stretches both before and after (otherwise final yields would have been even lower). Summer was long, hot and dry; drought between mid-June and mid-August left many vines parched, and caused serious hydric stress issues. August thunderstorms brought some welcome rain (and some unwelcome hail).

From an early start to the season, an early harvest followed naturally. The first white grapes were brought in from mid-August, and the vast majority of the reds were harvested in September; Merlot first, Cabernet Sauvignon later in the month. It was hot and dry throughout the harvest - for the pickers in the vineyards, 2020 was a 'trainers' not a 'boots' vintage. The last reds to be harvested were late-ripening Cabernet Franc in St-Emilion in early October. Then autumn rains set in.

There's no denying that for some vines and grapes, this season was a struggle; there was too much water early on (favouring terroirs with good drainage) and not enough later on (favouring terroirs with good water retention). For some properties in the summer, hydric stress was a real issue. When vines don't have access to enough water, photosynthesis stops and the vine 'shuts down' temporarily; this means that phenolic development (i.e. flavour development) stops in the grapes. It's not unusual in hot summers in many winegrowing parts of the world for vines to shut down for short periods, but if the shutdown is prolonged, it will lead to grapes with green and underripe flavours at harvest time. This is why August rains were so welcome in Bordeaux in 2020, unblocking some vines, preventing others from shutting down. Old vines also have an advantage here; with deeper root systems, old vines can access deeper-lying water reserves unavailable to younger vines with shorter roots. Cabernet Sauvignon tends to be planted in more free-draining gravel soils, and as a consequence Cabernet berries had less access to water in the hot part of the season. This meant smaller, more concentrated Cabernet berries at harvest. Merlot tends to be planted in more water-retentive clay soils, and in broad terms this vintage suffered less from hydric stress. With more Merlot juice to go around, the proportion of Merlot in the blends at many chateaux is a little higher than usual. Many chateau owners reported unusually aromatic Merlot.

The French Ministry of Agriculture tells us that between 2010-2019 Bordeaux produced, on average, the annual equivalent of 666 million bottles of wine. (The Ministry is silent on the question of possible diabolical influences). 2020 is about 10% down on that number. There are three main reasons. The wet spring brought mildew problems; then the summer drought caused serious issues with hydric stress. Finally, the mid-September harvest heatwave concentrated grapes through evaporation, leading to less (if potentially better) juice. But these reductions in yield were not evenly spread - some chateaux did manage generous harvests. The northern Medoc (Pauillac and St-Estephe in particular) managed more normal yields, and properties along the Gironde in general suffered less from hydric stress.

Winemaking in the time of Covid

2020 was of course the (first) Covid vintage, and it brought a whole new set of challenges. Assembling picking teams was more difficult than usual, and subject to changing restrictions. Sometimes it just wasn't possible to get a picking team together when the chateaux might have liked, and some grapes spent longer than strictly optimum on the vine. Ironically, of course, vineyards are actually quite a Covid-safe place to be. If you've ever participated in organised grape picking, you'll know there's a rhythm to the way picking teams move through vineyards, naturally maintaining a social distance.

Tasting in the time of Covid, and the Sevenoaks UGC

Normally at this time of year, two or three members of Uncorked would be recently returned from a week of trooping up and down Bordeaux, visiting chateaux and getting a sense of the vintage on the ground. This year, of course, that was not possible. So instead, samples came to us. Over three days in mid-April, every staff member of Uncorked (including one I haven't yet met) made the ascent to Andrew's mountaintop chalet to spend a day tasting through 120 hastily-organised samples of 2020 Bordeaux sent by the Union des Grands Crus de Bordeaux, whose tastings define every en primeur season.

Having every bottle side-by-side on a tasting table is very different from tasting more slowly as you tour round Bordeaux, chateau by chateau. Comparative judgements do become easier (and sometimes less forgiving!). And while we all miss the atmosphere of the region, it is easier to taste objectively when there isn't a solicitous chateau owner standing at your shoulder, with half an eye on your notebook.

After the Sevenoaks UGC tasting, last week we were again locked down tasting the second wave of samples. These tastings were conducted through wall-to-wall Zoom tastings, with chateau owners and representatives sharing their impressions.

The tasting table, commune by commune

Our Sevenoaks tasting table moved from north to south down the map of Bordeaux. The wines of the Medoc and the Haut-Medoc were ripe, floral and plummy. Cantemerle was a stand-out here. By the time we got to St-Estephe there was more spice and succulent dark fruit on show. Basile Tesseron's Lafon-Rochet stood out head and shoulders on texture, full, fresh and silky. Next stop south, Pauillac's classically powerful profile was clearly on show, and Batailley was outstanding here, packed with flavour and energy. St-Julien was the commune that showed best of all, with almost every sample showing fruit, spice, depth and great texture. The Barton stable deserves a special mention, with an excellent Langoa, and Leoville-Barton was one of the very best wines in the room. We shifted gear again for the more delicate, evasive, floral wines of Margaux, which at their best were yieldingly pretty. Moulis and Listrac showed some softer, lighter wines that will drink well early. Graves and Pessac-Leognan excelled; I deeply enjoyed the very typical red fruit, tobacco and mineral notes from wines across the area. On the right bank, St-Emilion put in a variegated performance; there were some disjointed wines, and the odd bottle whose heart was truly in the Napa Valley. But there were also some outstanding wines; Larcis Ducasse and Pavie Macquin are both absolute beauties. Average quality in Pomerol was very high, the overall impression was sweet silk. Finally, we tasted the other colour. Some dry whites struggled to muster enough acidity to really sing, but those that did (largely the usual suspects) were extremely attractive. It was a very similar story with Barsac and Sauternes; the best wines had enough zing to make the marmalade and spice sweetness irresistible, not cloying.

While there are as many different opinions as there are chateau owners (not to mention representatives, employees, etc etc), wide areas of agreement did emerge from our Zoom tastings. When asked the hoary question 'what vintage does this one remind you of?', many plumped for a combination of the two most recent: the opulence of 2018 with the same vein of freshness that characterised 2019. From Domaine de Chevalier, Olivier Bernard shared his strong opinion that the cool, unsettled second half of August saved or made the vintage. Sandwiched between a hot early summer and a hot, dry September, the cooler weather provided an essential counterpoint. 'The freshness you can taste in every wine is August'.

Many chateau owners talked about their experiments with biodynamics. This does not imply a wholesale rush towards biodynamic certification (a long and challenging process), but typically plot-by-plot testing of certain aspects of biodynamics. In the cellar, no chateau owner told us they were increasing the proportion of new oak, but more than a few mentioned they were dialling it back a little. Alongside the traditional 225-litre Bordeaux barrique, larger foudres of varying volumes are making more of an appearance. These offer the benefits of aging in oak with less of a marked oak footprint on the wine. And more chateaux are also experimenting with a proportion of clay (or sometimes glass) amphorae in the cellar, which impart no oak footprint at all and preserve purity of fruit. And everyone is nervous in St-Emilion. A new St-Emilion classification is due to be confirmed next year - the deadline for St-Emilion chateaux to file their submissions to the classification committee fell last week. Many chateau owners are hopeful about their chances for promotion - though not all. The owner of one prominent chateau expressed horror at the idea his chateau might be promoted to Premier Grand Cru Classe A. The inevitable increase in the value of his property would bring a corresponding increase in inheritance tax which would make it impossible for him to pass the chateau to his children.

We've seen the first releases already, and will be talking more about how individual properties performed as the campaign gets going. It's going to get fast and furious. Buckle up! /NT