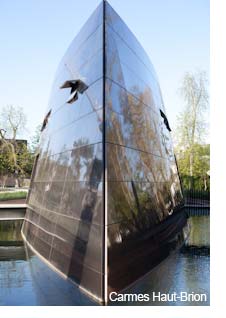 '2018 is an undoubtedly great vintage'

It was a challenging year with brilliant results; a difficult, dramatic start culminating in a vintage that will go down with the best. What a turnaround - in July 2018, most vignerons were wondering in dismay how they could save the vintage. But by the time the wine was going into barrel, they were basking in the satisfaction of knowing they had banked what more than a few consider to be their best wine ever.

As much as 2018 is a story of great wines in the making, it's also a story of low yields. As Jean Merlaut put it, his Gruaud Larose and Sarget 'aient un goût de trop peu', have a taste of too little - there's not enough of them.

Winter 2017-2018 was cold and rainy. This was welcome to begin with, helping the soils to build up water reserves. But the rain went on and on. Between January and March it rained almost every other day, with average rainfall close to double what it would normally be for that period. The rains continued all the way through to mid-July, bringing disease pressure and threatening a washout harvest.

The definitive change in the weather timed itself, implausibly enough, with the French World Cup win. The clouds disappeared and idyllically hot, sunny weather set in. But the ground was still sodden, and with warm vapour now rising fast off the ground, conditions were ideal for the development of fungus - unprecedented levels of mildew set in, the worst by most accounts for 50 years. Huge amounts of fruit were lost - at Chateau Biac in Cadillac, for instance, they lost 90% of their crop in July. Meanwhile, the hot weather continued. In fact, 2018 was hotter overall than the famously hot 2003, but the crucial difference is that unlike in 2003, in 2018 it cooled down at night, so the wines have freshness to match their concentration. Mildew impacts on quantity, but not on quality - diseased fruit simply falls off the vine. So when harvest took place between September and October, almost everyone was bringing in clean, concentrated fruit.

Where did best?
Pomerol and St-Emilion were the least consistent communes. The best wines here are astonishing - Canon, Vieux Chateau Certan and Troplong-Mondot leap easily to mind - but there are some properties where the wines have plenty of richness but lack balancing lift. Cabernet Franc was very successful this year, and it shows in wines that have a significant proportion of it. For a hot year, there are some surprisingly good dry whites in Pessac-Leognan. And there are some extremely good reds, and a few that lean towards the heavy. In Sauternes, the dry, sunny autumn meant that the arrival of botrytis was late, but there are small volumes of some fine, fresh and elegant wines. But the Medoc was the area where the wines showed most consistently well. Property after property here showed us wines that combined concentration with freshness, bite with fruit, succulence with profundity. These are very, very good wines that will give pleasure for many years to come, and the best are breathtaking.

A comparable vintage?
Many vignerons didn't like to be drawn on which (if any) vintage resembled 2018. But everyone who did answer that question gave us almost the same answer - 2018 was a combination of 2016 (for that vintage's freshness and acidity) with either 2009 (for succulence) or 2010 (for structure and richness). Either way, these are compelling combinations.

Le global warming, c'est vraiment ici
Ripe Merlot has more sugar than ripe Cabernet, so right-bank wines tend to be more alcoholic. We heard lots of agonising in Pomerol and St-Emilion about global warming - not so in the Medoc, where Cabernet ripeness levels were more consistently à point. Where will Bordeaux be in 50 years? Cabernet Sauvignon isn't planted on the right bank because it won't ripen reliably in the relatively cold, water-retentive clay soils there - is that set to change? Will the right-bank Merlot need to be uprooted in favour of Cabernet just to rein in alcohol levels? Will the relatively warmer, well-drained gravel soils of the Medoc become too hot for Cabernet, and have to be replanted with Syrah?

A first timer's impression…
Bordeaux is a fascinating place. Grand scale, glorious chateaux populate the Medoc, yet if you drive away from the villages where the classed growths cluster, you're more likely to see dilapidated farmhouses. After the grandeur of the chateaux, the villages themselves are surprisingly modest. The quai at Pauillac has seen better days, with the faded charm of a British seaside town. Most of the Medoc is flat - the classed growths tend to sit atop small rises. (The better the chateau, the more notable the rise). Beyond the vineyards, there are fields and scraps of marsh. Pomerol seems as flat as a pancake with a wide-open horizon, but not at all far away St-Emilion has lovely rolling hillsides. Drive out into Entre Deux Mers and you will find yourself in stunning backwoods countryside.

Some of the primeurs tastings can feel slightly jaded and corporate, but you are equally likely to find yourself talking to people authentically passionate about the wine they are making. At every chateau we asked at, we were told that there were more people visiting this year than ever before. There was certainly a bustle, but some old hands suggested that the claim of busier-than-ever rang slightly false.

The campaign to come
This year in primeurs week, the vineyards were unusually advanced for the time of year. Leaves were already opening, and there was a quite noticeable difference between the start and the end of the week. The big risk of an early start is a late frost, as in 2017, and every chateau we asked at admitted that yes, they were worried about frost. Nobody is giving anything away, but it has been suggested that they may prefer to wait until that risk is out of the way before launching their 2018s onto the market, so we may see a later campaign than usual.

Nobody is giving anything away about pricing, either. The Bordelais know they have a very good vintage on their hands, which might ordinarily suggest price rises, but there are other factors which may play against that.

The wines we'll be offering are displayed here. Tasting notes, scores and prices will be added as they become available and offers of significant releases sent by email. In the meantime, we'll be delighted to receive pre-orders - under no obligation - in person, by phone or email, or by clicking 'Order' or 'Buy' on the website. The wines will be shipped and made physically available in 2021. /NT