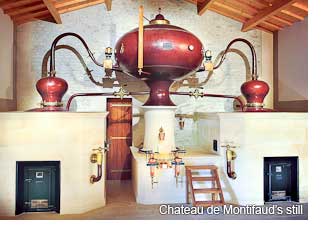 A brief guide to one of the world's most exquisite spirits

'When Cognac is well-made, it's among the finest spirits known to humanity' - Jason Wilson, Unravelling the Secrets of Cognac, vinous.com, September 2019

'When Cognac is well-made, it's among the finest spirits known to humanity' - Jason Wilson, Unravelling the Secrets of Cognac, vinous.com, September 2019

From the outside, the world of Cognac can seem pretty monolithic; the four big houses of Hennessy, Martell, Rémy Martin and Courvoisier together sell 90% of all Cognac consumed worldwide. But these big houses don't stand alone; they depend on a vast network of small growers and producers from whom they buy grapes or eaux-de-vie. And then there are many more houses who work on a much smaller scale, but who are able to produce a very high-quality product. As Charles Braastad pointed out to us in his recent Cognac masterclass at Uncorked, in a 'medium' sized house like his own highly regarded Delamain, their annual production is as much as the largest houses produce in only a day. Yet Delamain's range begins where many ranges tail off - their entry level Cognac is the beautifully delicate and complex Pale & Dry XO, in which the average age of the spirit is 25 years. Or consider Frapin, the only Cognac house to own all the vineyards their fruit comes from. As a result, they enjoy a level of quality control beyond most establishments - and they are master blenders to boot. As Jason Wilson discovered while researching his brilliant recent article for vinous.com, the big houses can be surprisingly reluctant to put their s forward for comparative tasting against the produce of some of these smaller houses… So what does go into a good Cognac?

By definition
Cognac is brandy. Specifically, it's a brandy produced in the region around the French town of Cognac (which lies to the north-east of Bordeaux). So what exactly is brandy? That would be a spirit distilled from fermented fruit, rather than fermented grains (i.e. whisky and friends). The base of a brandy can be any fermented fruit. The two most coveted brandies in the world, Cognac and its cousin Armagnac, both begin life as fermented grapes (aka wine).

Grapes
Almost all Cognac is these days made from the Ugni Blanc grape. Nerdfact! This is the same variety as Italy's Trebbiano. It's relatively neutral, high-yielding and acidic. It won't make the world's greatest table wines, but it's exactly what you want in a base wine for brandy, where the real flavours will come later from distillation and maturation. The region of Cognac is a lovely place to visit, with vineyards tumbling off the hillsides in every direction, as if aspect never mattered at all. And it doesn't, when you are making wine that will go on to be distilled - ripeness is not key here either. As Patrice Piveteau (the intellectual dynamo behind Frapin) was at pains to point out to me when I visited during harvest, making a good wine to drink is very different from making wine as a good base for Cognac.

Terroir
But as Patrice Piveteau also put it, good Cognac does begin in the vineyard, and the six defined crus here bring very different things to their Cognacs. Grande Champagne is perhaps the most prestigious cru of all, its rocky, limestone soils bringing forth the most long-lived Cognacs. Frapin and Delamain both hail from here. Petite Champagne sits to the south of Grande Champagne with similar, if less compact soils; this cru may not produce Cognac quite as long-lived as the best from Grande Champagne, but there are some truly lovely Cognacs to be had here. Another favourite Cognac of ours - Montifaud - comes from here. If you see Fine Champagne on a label, that refers to a blend of Grande and Petite Champagne. Other districts are Borderies (also rated), Fins Bois (mixed reputation) then Bons Bois and Bois Ordinaires - the latter two considered inferior and really only used in blending.

Distillation
Cognac must be distilled twice, in traditionally shaped copper pot stills called 'alambics charentais'. After the second distillation, you will have a colourless spirit, or eau-de-vie, of around 70% alcohol.

Barrel aging
The eau-de-vie must then be aged in Limousin oak barrels. The legal minimum is two years, but it will often be much longer, especially at the quality end of the market; some casks repose for many decades, gaining flavour and colour. The upper limit is about half a century, after which the barrel will impart no more flavour. As the Cognac interacts with the oak barrel and the air, it evaporates at the rate of about 3% each year, slowly losing both alcohol and water. This is 'la part des anges' - the angels' share. Eventually, the Cognac will be transferred to demijohns and stored for blending.

The master blender's art
The marriage of casks of different ages, with different base spirit and potentially from different local terroirs, is the key to achieving complexity of flavour. At Frapin, they are masters at the marriage of barrels that have matured in their dry cellars with those that have matured in their humid cellars. (Even to the novice, the two kinds of cellar smell entirely different). Blending is a daunting task… I am in awe of the brilliant, trained palates that can pull it off with consistent results.

Offered subject to confirmation; available now online and in the shop