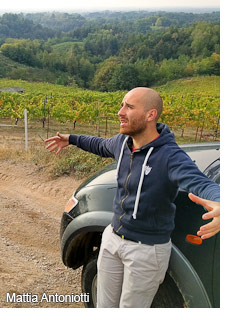 From the land that time (almost) forgot

North of Barolo and Barbaresco, south of the Alps, in forest-clad hills on the banks of the Sesia River: the region of Alto Piemonte. Once upon a time, this was the engine of North Italian wine production. In the early nineteenth century, Alto Piemonte - and not Barolo - was the source of Italy's most sought after Nebbiolo bottlings. But phylloxera came to devastate the vineyards, then Depression, war and industrialisation drew people away from the land. Many former vineyards were simply swallowed up by forest. But some of our great recent vinous discoveries have been from here; small, artisan wineries making delicious, beautifully crafted wines in a traditional idiom.

Briona is the southern gateway to the Sesia Valley, and there have been Castaldis here for hundreds of years. In the past, grapes were something they cultivated and sold on their family farm alongside the rice and the livestock. But in 1996 Francesca Castaldi took the plunge, and started up a proper, small winery. Latterly she has been joined by her son Marco, who has picked up winemaking experience as far away as Australia. Together they release their flagship wine under the (tiny) local Fara DOC. It is an exquisite, savoury red, saline and herbal, with mellow notes of cherry and flower. It blends 70% Nebbiolo with 30% of the very local Vespolina. Their 'Bigin' is not a large visitor from Scotland, but a younger, delicious, more fruit-forward style of pure Nebbiolo.

The Castaldis are also close friends with the Antoniottis, who live further up the valley in the village of Casa del Bosco. It was the success we enjoyed last year with the Antoniottis' Bramaterra and Coste della Sesia that inspired us to look more closely at Alto Piemonte. Father and son Odilio and Mattia Antoniotti fashion lovely wines which show what this area is and always has been capable of. Their Bramaterra is mainly Nebbiolo, but also blends in local Croatina, Vespolina and Uva Rara. The 2017 is poised and tense, with a beautiful weave of fruit. The 2015 Bramaterra Riserva is composed and sleek, a little weightier, and terribly elegant. They also release a 100% Nebbiolo under the Coste della Sesia DOC; the 2017 is extremely pretty, full of ripe red berry aromas. And with delightful aromas of blueberry, white pepper and Alpine herb, the Pramartel is a younger, stainless steel-raised version of the Bramaterra blend. /NT