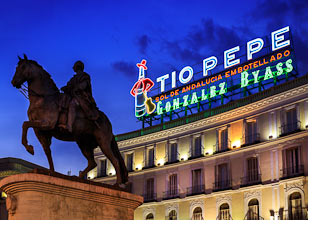 6 bottles of en rama sherry for only £99 including delivery

I first fell in lust with the finos and manzanillas of the south of Spain during a stay in the port city of Cádiz, just down the road from the sherry town of Jerez. Nothing else seemed to go so well with a bowl of salted almonds, briny olives or grilled prawns, or even just watching the Atlantic breakers roll in. Sherry is Andalucía's seat at the great table of wine, and manzanillas and finos sit at the lightest, palest end of the spectrum. And the world's most famous fino sherry is Tío Pepe, on the market since 1844. It is the child of Jerez's most distinguished bodega, the grand and sprawling Bodegas González Byass. It is sometimes maligned for its ubiquity, but the truth is that it is a product of impeccable quality: a classic, polished fino. La Gitana is the child of the similarly prestigious Bodegas Hidalgo, based at Sanlúcar. The sea lies only 300 metres away from their barrel cellars and distinctly marks the character of this delicate, chamomile-and-breadcrumb manzanilla.

So what's the difference between a fino and a manzanilla? A fino is a lightly fortified white wine preserved and influenced by a yeast called flor, which grows in a film on the wine's surface while it is in barrel. Manzanillas are made the same way, but specifically in the seaside town of Sanlúcar where the air is more humid; that means a thicker layer of flor, higher acidity and slightly lower alcohol, for the very lightest, driest style.

For a long time, sherry aficionados have known that however good a glass of either of these great sherries poured from the bottle may be, they won't have the raw intensity, the sheer depth of flavour, as a glass drawn directly from the cask. And so was born the concept of the En Rama ('raw') sherry. These are released in small numbers in the spring, when the flor is at its most vigorous. With the minimum of clarification and filtration before bottling, they capture that cask-fresh intensity; they are supercharged versions of their non en rama equivalent: vibrant, intensely fresh, revealing layers of flavour not normally apparent. Both González Byass and Hidalgo release an en rama version of their flagship offerings. And now, so that you can compare and contrast, we have put together a mixed case of 3 bottles each of the 2020 releases - at only £99 including delivery for 6 bottles of the finest, freshest en rama sherry! /NT