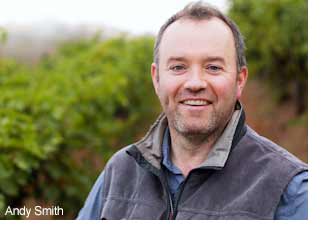 'Harvest fruit in absolutely premium condition, then do as little as possible' - Andy Smith, winemaker

Complex, multi-dimensional, effortless wines. DuMOL are making wines all about the purity of place: the extreme south-west of the Russian River Valley, the cooler corners of Napa. It's explicitly not about the winemaking, which they try to keep simple - fancy winemaking techniques, in the DuMOL philosophy, tend to obscure vineyard character. It's all about the fieldwork. And it's not easy when the vines are dripping every morning from the Pacific fog.

So who are these guys? The driving force here is Scots-born Andy Smith, partner, viticulturalist and winemaker. After a mis-spent youth swimming competitively for Scotland, Andy moved to New Zealand and learned to make wine. Then he moved to California, and made wine for clients across the state before landing at DuMOL in 1999. He's now worked 20 vintages there, and DuMOL has grown steadily, getting access to some highly sought-after parcels across Napa and Sonoma, and seeing their wines achieve cult status and allocation sales.

Their 2016 Highland Divide Chardonnay is a joy of citrus and stonefruit aromas, and the Charles Heintz - from a vineyard that is considered a Californian grand cru, among the 10 best Chardonnay vineyards in the state - is intense and redolent of lime, honey and truffle. The Pinots are remarkable; from an old vine, dry-farmed, late-ripening site in Green Valley, the Widdoes Pinot Noir is floral, spiced, intoxicating. But the wine that really put DuMOL on the map and remains their flagship is the Finn Pinot Noir, a blend from two adjacent vineyards on different soils (one sandy, one clay); the 2016 is an ethereal mix suggestive of incense and red fruit. And if that wasn't enough, DuMOL also make some beautiful Cabernet. From Napa, the Ballard Cabernet (from volcanic soils at the summit of Spring Mountain) is as much pine and smoked meat as blueberry fruit. /NT