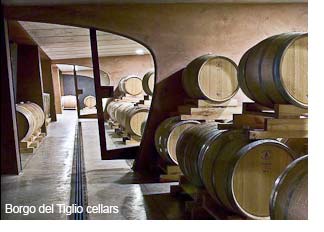 'Borgo del Tiglio is one of the world's greatest estates. Proprietor Nicola Manferrari crafts brilliant, chiseled whites built on saline-infused minerality and energy that capture the essence of some of Friuli's most compelling terroirs.' - Antonio Galloni, vinous.com

Nicola Manferrari never meant to become a winemaker; for one thing, there wasn't any money in it. He trained as a pharmacist. But when his father unexpectedly died in 1981, someone needed to step in and make the family wine. It wasn't a bad little business; it had always been known locally that the family had the best vineyards in the area. Nicola took over that year, and to his mother's dismay, he was hooked. He has never looked back. Nearly 40 years on, and Borgo del Tiglio is regarded as among the world's greatest estates.

He struggled in the early days. He was disheartened by the trend at the time to pick the local Friulano early to maintain acidity, before it was fully ripe, and dreamt of making a different kind of wine which would age well. He has always been very focussed on letting terroir speak. He aimed for a style as clean and elegant as possible, since defects only mask terroir. These days he works with his son Mattia, who says that when they taste every barrel blindly and can tell from which vineyard it has come, they have done their job well.

The winery is perhaps most known for its Friulano, particularly the Ronco della Chiesa, which Ian d'Agata describes as 'one of Italy's best twenty or so whites in practically every vintage'. And the Chardonnay Selezione is unquestionably one of Italy's very finest examples of the variety. Latterly, as some wineries in Friuli pull up varieties seen as non-indigenous, Nicola furiously insists that the only criterion for judging whether to keep a grape variety should be the quality of the genetic material - his Sauvignon and Merlot are as superb as his (local) Malvasia. These are a world-class set of wines, some of the most ageworthy you will find anywhere. /NT