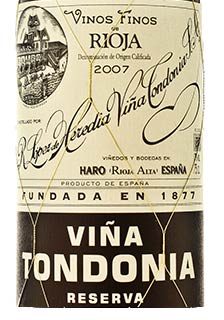 Lopez de Heredia hit it out of the park, again

'This has to be one of the finest vintages of Viña Tondonia Reserva of recent years. 96 points' - Luis Gutierrez, robertparker.com, June 2019

It remains one of the wine world's great bargains. Complex, profound, long-lived, there are very few wines that can match it at the price point. And after a series of successful vintages, Lopez de Heredia have done it again, with a great 2007; the vintage brought them a long growing season that allowed the grapes to develop phenolic ripeness and intense flavour complexity.

On the border between the two regions of Rioja Alta and Rioja Alavesa, the Tondonia vineyard is a fine site that slopes down towards the River Ebro. It's the jewel in the crown of Lopez de Heredia's holdings, meticulously assembled from the purchases of yesteryear, and their flagship bottling. The wines of the Rioja Alta region tend towards a more ethereal, high-toned character, and Tondonia epitomises the style.

Lopez de Heredia was founded in 1877, at a time when phylloxera was ravaging French vineyards and wine lovers had to turn elsewhere in search of fine wine. The world has moved on since then, but at Lopez de Heredia they continue to make wine as they always have, unswayed by fashion. They ferment in huge wooden vats without temperature control, additions or technological interventions. Finally their Tondonia reserve spends eight years in American oak barrels (assembled at their in-house cooperage). It's a length of elevage far beyond that required by law, but they refuse to release their wines until they consider them ready. Which isn't to say these wines won't keep ageing beautifully; in advanced old age they become mushroomy, truffley concoctions, but few people old enough to buy legally from this offer are likely to see this vintage so far developed. /NT