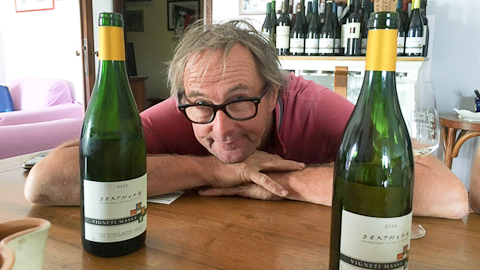 When Walter Massa took over his family farm at the end of the 1970s, he was bowled over by the intensity of the wine he made from his Timorasso grapes. Five generations of the Massa family kept the last few hectares of the Timorasso grape variety alive in the steep hills just to the east of the town of Tortona in Piedmont, Italy. Once upon a time, Timorasso was praised as a noble variety and widely planted across Piedmont. It used to form the backbone of Gavi. But it has never been an easy grape to manage, and over time and after phylloxera it was almost entirely supplanted by the more reliable if less exciting Cortese.

It`s not just Timorasso that Walter makes. There are also has some very fine reds in his portfolio. Croatina is another local variety. It`s not simple to grow either, but Walter has never been one to make things easy for himself. Fresh, creamy and sweet, with a tannic backbone a little softened by time, Walter`s Pertichetta is complex and balanced. And then there`s Barbera, mainstream by Walter`s standards. Native to Piedmont, it has spread across Italy and the world; yet the best examples are still Piedmontese. Monleale is a blend from vineyards outside Walter`s home town. Bigolla is from a single vineyard barely bigger than a hectare. (NT 09/07/18)