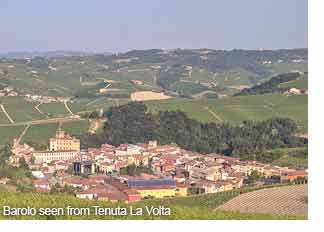 It might not be the first name that springs to mind when you think of Barolo, but the Cabutto family is by no means new to the area. In 1920 Domenico Cabutto bought the La Volta farm, but it is the third generation that has made the biggest advances. Brothers Osvaldo and Bruno joined the company as youngsters in the seventies. They constructed new cellars and overhauled their fermentation and maturation regimes, and in 2014 bought 5 hectares of vines. 2016 was also the first vintage they could take advantage of their new, high-tech weather station, which helps them minimise their spraying programme as well as contributing to climate research.

Just to the west of the northern edge of Barolo commune overlooking the town, Cabutto's Tenuta La Volta is on the ridge made up of Sant'Agata Fossili marls, very similar to Cannubi. The neighbouring castle ruin is popularly thought to be haunted by the souls of debauched satanic party-goers killed by the collapse of the great hall.

The quality of the 2016 wine is the result of the family's hard work and commitment, as well as the fantastic growing season. Both underground in those new cellars but primarily in the vineyards, the brothers were able to capitalise on their investments and experience to realise the full potential of this highly acclaimed 2016 vintage. We tasted this from 10,000 litre Slavonian cask a while ago, and now a bottle consumed over 3 evenings was a delight, with an almost voluptuous richness of fruit with fine tannins and a cut of fresh acidity. There's lots going on now but plenty of upside for future development. And you can't ignore the price. The Cabutto's authenticity extends to providing great wine we can all afford. They sleep soundly whatever the neighbours get up to. /CW

Offered subject to confirmation; available now online and in the shop