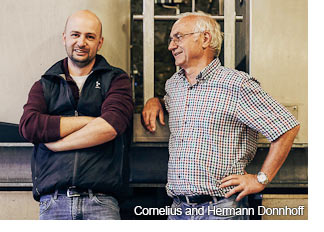 Ripe fruit swept along by lively acidity, Kabinetts and Spatleses where a spoonful of honey lifts the stonefruit and pith, the breathtaking intensity of the dry GGs (Grosses Gewachs, Great Growths). In 2018, the Dönnhoffs have done it again. I had the great pleasure of tasting this range alongside a set of equally top flight wines from the Mosel, Rheingau and Rheinhessen last week, and two things struck me. One was how Dönnhoff represents the epitome of the bright, crystalline Nahe character; more lemon, lime and flower than mango, melon and petrol. The other was how effortlessly they take their place among the very best Germany has to offer.

They have form, of course. Hermann Dönnhoff kicked things off in the 19th century when he planted vines in the Nahe's very best sites; Hermann Jr. brought the winery into the 20th century, and to renown across Germany. Taking over in 1971, Helmut Dönnhoff focussed on consistency in quality and style, and in the process spread the winery's reputation worldwide. Now it is the turn of his son Cornelius to bear the family mantle. It is a responsibility he feels deeply, and one which he lives up to; in 2014 he was named as German Winemaker of the Year, and he has not rested on his laurels since.

With vineyards on both sides of the Nahe having quite different soils, aspects and microclimates, they are able to produce dazzling wines in a variety of styles. The gentle slopes and deep soils of the Kahlenberg vineyard do well with dry styles, while sheltered, warm Krotenpful excels at Kabinett. The slate-soil, south-facing Leistenberg vineyard basks in the morning sun, and with less afternoon exposure is again ideal for Kabinett; it has excelled in 2018. Two bends of the river away, the Norheimer vineyards are the oldest recorded on the Nahe. Wild cherries grow among the vines here and are said to mark the character of the wine. Steep Höllenpfad ('Path to Hell') is as notorious a place to work as it is known for its floral, spiced wines; Hermannshöhle is widely considered to be the river's very finest vineyard. /NT