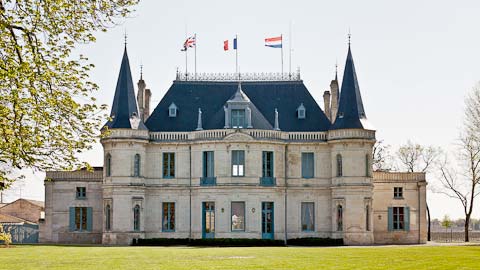 Named after one of Wellington`s generals, Charles Palmer owned this Chateau for nearly thirty years until 1843. A bit of a charmer, he intercepted the young widow on her way to the sale of her property and ended up with a bargain and who knows what else. Unfortunately, the general ended up as one of those who made a small fortune in the wine trade by starting out with an enormous one and his investments in Ch Palmer nearly bankrupted him. The only reason that Palmer has such a lowly position in the 1855 classification is that the subsequent owners had little time to put things right. Palmer is decidedly not a third growth. In fact, had the Mentzelopoulos family not taken over Margaux when they did, Palmer would be the best property in that commune. Planted entirely on the best gravel, the cepage comprises equal parts Cabernet Sauvignon and Merlot at 47% with the balance of very low yielding Petit Verdot. The Chateau has a policy of replanting about a hectare per year, viticulture is not certified organic or biodynamic, but the principles of both are employed. Harvesting is done by hand, unusually always by a large group of Danish students from the same institution. The second wine, now called Alter Ego de Palmer, is arguably the best in Bordeaux and probably a third growth in its own right. (CW 08/06/10)

There are currently no wines for this area.