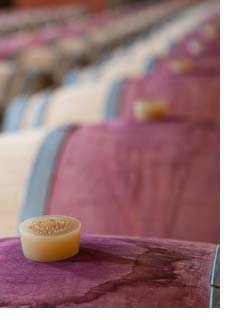 A vintage of contrasting fortunes

'Bordeaux 2017 will perhaps always be remembered as the frost vintage. This is, of course, not inaccurate. Roughly 40 per cent of the potential crop fell victim to the plummeting temperatures of the early morning of the 27 April 2017, the equivalent of 240 million litres of wine. But we are categorically not in 1991 or 1956 territory. Whilst frost is a key part of the story of the vintage it is nothing like the whole story. More significantly still, it threatens to give a misleading impression of what, for many, is a very strong - if not perhaps ultimately great - vintage.' - Professor Colin Hay, Professor of Political Economy, Sciences Po

A fortnight ago, the two-strong (three, if we count Zoë's next family member) Uncorked team descended on Bordeaux in a more than usually sceptical frame of mind. But by the end of the week, just like Professor Hay, we'd discovered that there's more to 2017 Bordeaux than the frost. Moreover, we'd discovered that the vintage is potentially very good, and occasionally great.

How so? Cruelly, it was vignerons in the less prestigious appellations who took the brunt of it. There was little or no damage in St-Estephe, Pauillac and St-Julien, nor the Bordeaux suburbs of Pessac, and most of the Pomerol plateau as well as the limestone slopes and plateau of St-Emilion escaped unscathed. According to Gavin Quinney (http://gavinquinney.com/2017/11/02/bordeaux-2017-harvest-and-weather-report) 80% of the top chateaux enjoyed a good harvest, and there was minimal damage to the plots which provide the grapes for their first wines. Besides, the main impact is on quantity, not quality, and so even some of the chateaux badly affected have made very good wines, while other, less fortunate ones have made no wine at all.

Season
The winter of 2016/2017 was dry, with barely half the normal rainfall between November and February. January was cold, but then February, March and the first half of April were mild, and this spurred strong vegetative growth. Then temperatures fell and an early morning frost on 21 April was followed by the more destructive one on 27 April. May saw mild, rainy weather and vegetative growth accelerated again. Flowering occurred about 10 days earlier than usual in favourable conditions, confirming that the vintage would be early. Early summer was hot, but water stress attenuated by rain at the end of June. July and August were relatively cool and very dry.

Harvest
The harvest started early with grapes that were fully ripe but not especially high in alcohol. Rain towards the middle of September caused difficulty with the Merlot for some producers but provided a welcome boost for the later-harvested Cabernet Sauvignon which was brought in under dry, warm conditions in the second half of the month and early October.

The wines
Without the September rains, and despite the frost, we might have been looking at a third outstanding vintage in a row. As it is, we found the quality of the reds a notch up on 2014 - there's a little more richness to them, more density, and perhaps a little more charm - but not quite the equal of that of the '15s and '16s.

Early reports suggested that 2017 is a left bank vintage. We don't agree. Both St-Emilion and (especially) Pomerol have potential wines of the vintage. And these are not just extraordinary wines in the context of this vintage, but in the context of any vintage.

The left bank impressed us less with its peaks of quality but more with its breadth; the appellations and - specifically - the chateaux closest to the Gironde offer a wealth of very good wines in a style we greatly enjoy. Pauillac, St-Julien and Margaux all proffered very good samples. Pauillac and St-Julien were the most consistent but Rauzan-Segla, Brane-Cantenac and Palmer showed that Margaux is potentially just as strong.

What is that style? Winemakers and chateau owners were uncommonly willing to pinpoint it and for most, it is somewhere between 2014 and 2015/16. Jean-Philippe Delmas at Haut-Brion says it's closest to 2001, but with more freshness. At Canon, Nicolas Audebert has made a wine they consider on a par with the property's outstanding last two, and this is borne out by the technical analysis. At Le Pin, Jacques Thienpont considers the '17 more classic than its two predecessors and his cousin Alexandre at Vieux Chateau Certan doesn't disagree. Ce n'est pas un vin de plouck, said Alexandre, never one to conceal his feelings. These are wines of balance, structure, fragrance and freshness. Many samples were easy to taste, and the tannins were soft and well-integrated. Many will drink well young, but the best will age gracefully.

As usual in vintages with good acidity, 2017 is also an excellent vintage for the dry whites. There are also some excellent sweet wines, though parts of Barsac were decimated by the frost and our heart goes out to Berenice Lurton who, after finally breaking even with 2015 and 2016, isn't making a single bottle of Climens in 2017.

The market
2017 has two tough acts to follow. No matter how good the wines, it will inevitably encounter some resistance from buyers of the last two, great vintages. Many in Bordeaux seem to grasp this, and chateau owners to whom we spoke sounded reassuringly cautious. If this morning's release of Palmer, at 20% below last year's price, is an early indication of things to come then there should be some wines worth buying. /AR